The Love After Lockup cast just introduced the final season 3 couple, Heather & Dylan Smith. Heather’s Love After Lockup intro was a bit confusing, and fans immediately started asking if these two ever even hooked up before he went to jail, since he was locked up a few days after she met him.

Love After Lockup’s Dylan Smith just happened to be taking a shower when Heather walked in on him. According to Heather, the couple began dating while he was in prison. He went to prison for selling ecstasy to an undercover police officer and he was there for five years.

Love After Lockup Spoilers Summer 2020: Will Dylan and Heather Last?

Dylan will be released soon and Heather said, “I am ready to touch him and lay with him, give him a bath and just cook food for him. I am very excited.” Dylan has called Heather his wife on multiple occasions and fans are thrown off by this because they have never even had sex! 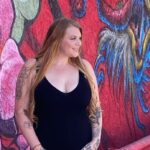 Could this be what prompted Heather to go shopping for lingerie and sex toys? Heather clearly wants something sexual and intimate with Dylan and she is getting ready for him to get out of prison so she can show him just how much she loves him. “When I started talking to Dylan, it was like the best thing ever. Like he can speak to parts of me in ways that nobody else can ever be able to. I felt like a goddess.”

Fans of Love After Lockup are not convinced that these two will work though. Many of them think he could be gay. One fan wrote, “Also…Dylan is definitely giving gay! Stop playing in our faces, Heather!” Another wrote, “Sorry girl. Dylan looks gay.” One more chimed in, “Heather just said she and Dylan are married in their minds. This is gonna go well.”

Do you think that there is hope for these two to work out as a couple? We hope that Dylan and Heather’s love can last and that she isn’t in for a big shock when they finally do get down and dirty. Let’s hope for the best for these two.

You can keep up with their romance on Love After Lockup. It airs on Friday nights on WeTv at 9 p.m. EST.  Be sure to catch up on everything happening with reality TV right now. Come back here often for Love After Lockup spoilers, news, and updates.

Doubling Down With the Derricos News: Baby De’Aren Derrico Home With Her Family

‘Love After Lockup’ News: Dylan Smith Arrested, Facing Up To 30 Years In…