Sweet Home Sextuplets updates reveal great news for fans of the TLC reality series who have been waiting for a season 4 premiere date. TLC has released that information as well as a tantalizing look at the main storyline—we think you’re going to love it!

We have the answers to your questions, including “Is the family Waldrop family still living in their trailer home?” right here.

The answer is yes, the adorable family is still residing in a trailer home. But the dream vision that Courtney Waldrop had isn’t all that after all.. In the beginning the cribs looked right at home and everything looked to be organized. 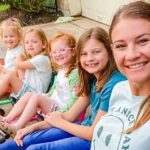 But as we’ll learn in a minute, there were some unforeseen issues that must be dealt with. Along with their cribs, the babies all had their toilets set up. The problem was that Courtney found out what it’s like to try and train multiples all at the same time—messy to say the least!

When the kids wouldn’t cooperate, Courtney resorted to training them individually but that didn’t work either. There was no Plan C and Courtney simply gave up.

So, what happens in the new season? A few mishaps, that’s what. As for living in a trailer home, it’s a risky proposition in Alabama where tornadoes like to strike. Plus, the remodeling still isn’t finished. Poor Courtney has to eat her words after telling Eric that she thought of everything as for as the remodeling goes. Oops.

Complicating matters, aside from the ongoing need for diapers and the threat of tornadoes, the sextuplets no longer fit in their cribs. Plus, there’s coronavirus to deal with which means the big family must hunker down in a not so big trailer.

Have you ever tried living as one of 11 people in a home that you were forbidden to leave? You can imagine the stress and strain that causes the family. So the new season delivers a bumper crop of drama for the fam that includes God’s Divine Nine.

You do not want miss a single minute of the action when Sweet Home Sextuplets premieres Tuesday, September 29.