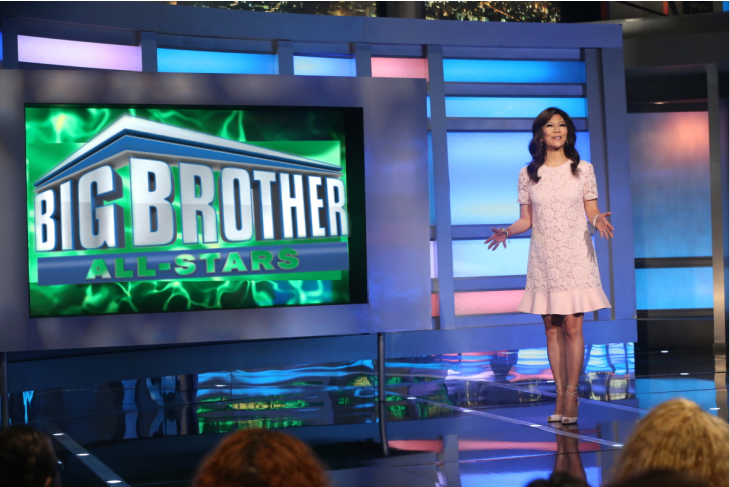 CBS Big Brother 22 All-Stars finally premieres tonight, August 5, 2020, after weeks of rumors and speculation. The CBS two-hour event, is a first for Big Brother and the season premiere will be live and the cast will be revealed as they move into the BB house. Julie Chen Moonves will be the host for the season.

Each week Sunday, Wednesday, and Thursday we will follow the new group of people living together in the Big Brother house outfitted with 94 HD cameras and 113 microphones, recording their every move 24 hours a day.

Tonight Big Brother celebrates its 20th anniversary.  For the first time ever tonight’s premiere episode is happening 100% live.  16 houseguests are entering the Big Brother house.  What they all have in common is they are all entering the house with something to prove. 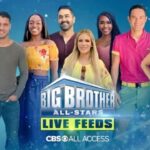 Here are the first 4 All-Stars

The 4 contestants have been quarantined individually and have been tested multiple times for COVID 19.  The four contestants are wearing masks.  Julie is standing 12 feet away.

Once the 4 enter the Big Brother bubble house they can remove their masks.

The 4 All-Stars Enter the House and the Competition Begins

The 4 enter the house and the game starts.  The 4 run into the house, remove their masks, and look around.  They start to compete, they find 4 games where they have to get balls in holes. The game is difficult and no one is making much progress.

Christmas is the first to move on.  Only Christmas will advance to the HoH competition the time ran out for the other 3.

Julie welcomes them to Big Brother All-Stars. She tells them when they go into the house the first competition begins.

The Next 4 All-Stars Enter The House

When they get into the house the first 4 houseguests are hidden and they start to maneuver the same game as the ladies.

Ian is the first to finish. Kevin is the second winner and they have both advanced to the live HoH competition.

Julie welcomes them to the game and lets them move in.

The Next 4 All-Stars Enter The House

Again, the same game is setup.  The four are finding the competition tough.  Julie cautions them to be patient.  She tells them they have to keep trying.

Nicole is the first to finish and is moving on to the HoH competition.  The other ladies run out of time so only Nicole advances.

Julie reminds them the second they walk in the competition starts.

The Last 4 All-Stars Enter The House

Again they begin the same game.  Memphis is the first to finish and Cody is the second.  They both advance to the HoH competition that will happen later.

Julie brings in 4 of the All-Stars so the last 4 can meet them.  Everyone is excited and hugs.  Julie tells the 8 All-Stars to take a seat.  Julie calls the next 4 All-Stars.  Again, Julie makes them all take their seats.  It is time to meet the final 4 All-Stars.

Julie tells them to Listen Up and Sit Down.  No one is listening to her.  Finally, they sit down.

She welcomes everyone to the All-Star Loft.  Julie asks who has gotten married since they last played the game.  7 All-Stars got married, 3 divorced and 6 have children.

Julie asks the All-Stars what they think of the other All-Stars.

6 of the 16 All-Stars will compete in the HoH competition.

The houseguests are in BB City where they will compete all summer long.   The HoH competition is called ‘Star Steppin; they will run across the star-studded field some stars are solid and some are not.  If they fall they have to go back. The All-Star who gets across fastest wins.

Memphis is the first up and he falls many times.   The course is not easy.  Memphis scores 1:12:22 Next up is Cody and he scores 22:06 and he is in the lead.  Memphis has to take a mystery envelope since he is no longer in the competition.  Christmas is next and she does not beat Cody’s time.  She has to take an envelope.

Cody The First BB All-Stars HoH Of The Summer

Julie takes Cody to the diary room.  She asks him which All-Star surprises him the most.  He replies Kaysar.  Cody tells Julie he wanted to win because a lot of the competitors he has not spoken to in a long time.  He is not nervous being the first HoH.  Cody says it is going to be difficult playing this season without Derrick.

Julie tells him a good thing is he is not going to have to be a Have Not, he is pleased.

Cody goes back to join the other All-Stars.

Julie tells the All-Stars that in their envelopes is either a cash prize of a Have Not there are 4 Have Nots.

Ian Gets a Have Not card; Christmas Gets $5000, Nicole, Memphis and Kevin are Have Nots.

Throughout the summer new rooms will be revealed to the All-Stars each room will twist up the game.  The first room will be the Safety Suite – inside is something every houseguest will want.  Each All-Star will get a VIP pass to get in.  Next week Julie will reveal more.

Sunday we will see who Cody nominates and the Have Not Room and more details about The Safety Suite.

Love After Lockup News: What Is Lacey Whitlow Hiding?