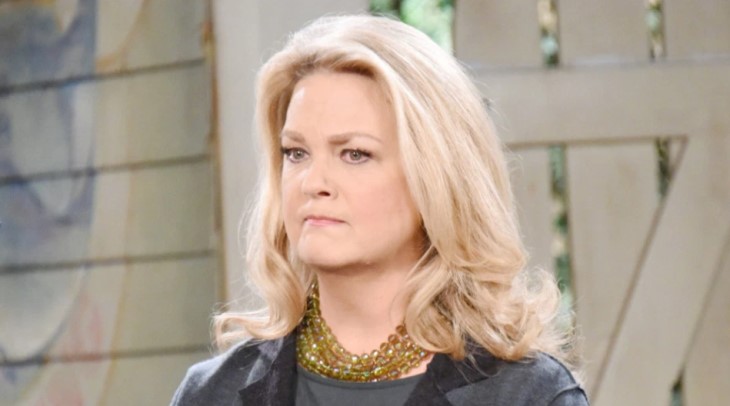 Days of Our Lives spoilers tease that Anna DiMera (Leann Hunley) will run into Sarah Horton (Linsey Godfrey) on the run with Rachel Isabella Black (Josephine and Rosalind May) in Europe in a future Days of Our Lives episode; will she do the right thing, or help Sarah because of her animosity towards Kristen DiMera (Stacy Haiduk)? 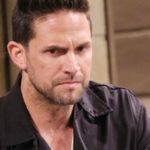 Days of Our Lives Spoilers – To Anna DiMera, Kristen DiMera Is Like A Female Stefano DiMera

To Anna, Kristen, even though technically she is not a blood DiMera since Stefano DiMera (then Joseph Mascolo) adopted her and her brother as children, is nothing but a female Stefano; and the memory of Kristen having had a Phoenix tattoo on her back only reinforces her position!

She can’t understand how someone like Kristen could ever be safe around children, let alone a young baby like Rachel. Undoubtedly, she and Tony DiMera (Thaao Penghlis) have been advised about Sarah Horton going off the rails and the baby really being Kristen’s baby who was thought dead….they’ve probably heard the whole story from someone back home, likely Chad and Abby DiMera (Billy Flynn, Kate Mansi).

It is probably not such a huge coincidence that Sarah and Rachel are living in Chad and Abby’s old apartment in Paris either since Abby is plainly on Sarah’s side while Chad is on Kristen’s! Jeanne Marie (Christine Kellogg-Darrin) called Abby while she and Chad were together, but Abby played dumb and reminded Chad how batty their former downstairs neighbor was when he thought he should have someone check if there was a squatter in their old apartment!

Viewers will have noted it was furnished, and Abby may have sublet it to Sarah on the sly! While Tony may wonder if his sister would be the best mother for her baby, Anna definitely won’t think so, and usually, Anna gets what she wants! If it were Tony and Anna discussing the situation he may bring in the fact that she is Brady Black’s (Eric Martsolf) child too and he should have some say so in the situation – Anna will argue that Brady is blinded and doesn’t see what a monster Kristen is!

DOOL Spoilers – Speaking Of The Devil

Speaking of the devil, even though Anna doesn’t think Sarah is a devil compared to Kristen, sure enough, she and Tony are in Paris and Anna’s out shopping (of course – Anna is always shopping!) and she sees Sarah taking Rachel for a ride in the baby carriage! Sarah is spooked – she’s already seen Rex Brady (Kyle Lowder) – and she begins to wonder how many Salemites are in Paris right now!

Anna tells Sarah that DiMera Enterprises has an office in Paris, and she tells her not only is Rex there when she mentions him, so is Austin Reed (Austin Peck)! Anna also warns that the ISA is looking for her and the baby, thanks to Brady and Kristen being in a panic and John Black (Drake Hogestyn) getting the ISA involved in looking for them.

Anna will not turn her in because she doesn’t want the dangerous Kristen to have the baby, birth mother, or not, and Brady is too blinded to see through her, unlike Anna! She doesn’t like anything to do with DiMeras although she thinks now that Chad is safe since he’s been un-brainwashed, but she’s not wild about Tony even having gone to the Parisian offices out of curiosity to see what they looked like, which he had never done before – or maybe he’s just checking to make sure his father is really dead and not running that office in yet another man’s body!

With Stefano, one never knows! Anna knows of some other places Sarah can hide, and Paris is a big town! She gives Sarah some traveling money and a list of some other places besides Chad and Abby’s old apartment – which Anna had already figured out – and promises to keep it between them!

Love and Hip Hop Atlanta: Tommie Lee Has Some Explaining To Do