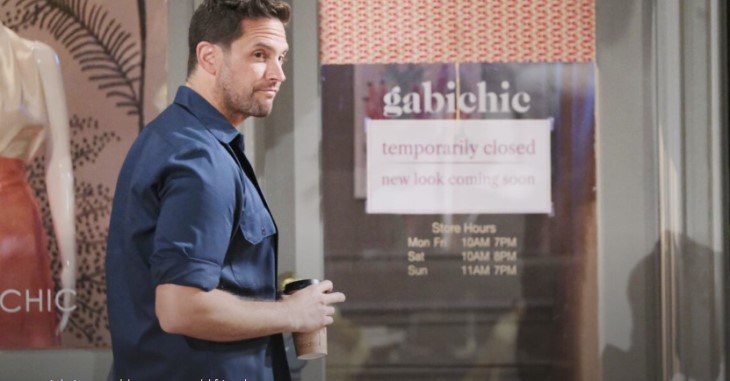 Days of Our Lives spoilers tease that Jake Lambert (Brandon Barash), the new mechanic in the town of Salem could either be a clone from Stefan O. DiMera’s (Brandon Barash) body, or possibly even the essence of Stefano DiMera (Stephen Nichols) in a totally new bionic body – or, possibly Stefan’s body with a bionic heart – all thanks to Dr. Wilhelm Rolf (William Utay), which wouldn’t surprise Days of Our Lives viewers at all! 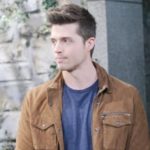 As Days of Our Lives, viewers will recall, Stefan Octavius DiMera died when he jumped into the line of gunfire trying to protect his mother, Vivian Alamain (then Robin Strasser) from a bullet flying from the gun of Lani Price, (Sal Stowers) who was still a detective with the Salem Police Department, trying to arrest Vivian.

She wouldn’t stop after being warned so Lani pulled her gun, but was startled with Stefan jumped in front of her and her gun went off, hitting him in the throat, and apparently affected his brain, causing brain death either from too much loss of blood or possibly the bullet could have traveled back and upwards, hitting the lower portion of the brain stem. Gabi Hernandez DiMera (Camila Banus) his new bride made the difficult choice of donating his heart to her enemy,

Julie Williams (Susan Seaforth Hayes) who she had left laying on the ground in Horton Town Square, after a major heart attack in which Gabi had thought Julie was faking – she had in fact faked a heart attack before in Gabi’s presence. Gabi didn’t believe it was for real because of that, and she said so, to anyone who would listen! She didn’t feel the least bit guilty for leaving the older woman dying on the ground! Luckily for Julie, Ben Weston (Robert Scott Wilson) and Ciara Brady (Victoria Konefal) were walking that way and Ben did CPR while Ciara called 911!

By the time Stefan got to Salem University Hospital, Julie needed a transplant and was too old to be on the transplant list, and though she was getting one from Kate Roberts (Lauren Koslow), who was in a coma, Dr. Wilhelm Rolf (William Utay) had snuck into her room and gave her a shot that brought her out of the coma! Gabi was finally convinced to give Julie Stefan’s heart, but even now she regrets it as witnessed in the argument that she and Julie had in Horton Town Square in Friday’s episode!

Then, nearly a year and a half later (accounting for the one-year time jump that happened last November) a doppelgänger appears in Salem – or so it seems! Ben Weston applies for a job in a garage, and the shop owner who says his name is Jake Lambert (Brandon Barash) rolls out from under a car he’s working on, and Ben is taken aback by his resemblance to his old boss, and friend Stefan Octavius DiMera!

Jake – or Jake’s reflection was first seen by Gabi in the window of the Gabi Chic store in Horton Town Square, which thanks to Chad DiMera (Billy Flynn) and Li Shin’s (Remington Hoffman) quick decision making behind Gabi’s back, she no longer owns and the locks were already changed so that she could not get into the store.

There was even a sign that they were closed for remodeling! The whole brand will probably be retooled and renamed and Gabi was angry but also scared, although she could not let herself show it! The most likely scenario is that the orphaned Sam Maitlin had a twin that he never knew about and neither did their mother, but with the talents of Dr. Rolf, anything is possible!

Days of Our Lives Spoilers – An Unknown Twin – Or A Clone – A Bionic Heart – Or The Phoenix With A Whole Bionic Body Complete With Heart?

It would seem that Rolf was working on Stefano’s essence being implanted into Steve Johnson (Stephen Nichols) since around the time Stefan died since that was when he had turned Hope Brady (Kristian Alfonso) into Princess Gina Von Amberg (Kristian Alfonso) again. But if he was going to have an extra body waiting in case Steve’s didn’t work out, for the Phoenix to rise again in, why Stefan’s?

It was missing a heart – but then Rolf did tell Gabi when she asked, that he could not put a resurrection serum into Stefan. He is supposedly buried in that grave that Gabi talks to but did she actually see him put in the ground or just his coffin?! Now that Stefano’s essence in a microchip has been destroyed by Chad, it would seem The Phoenix could never rise again…but don’t you think Rolf would have kept a spare copy?

Rolf could have cloned Stefan also, complete with heart, or raised Stefan and given him a bionic heart, but unless Stefan doesn’t want anyone to know who he really is, he wouldn’t use an assumed name like “Jake Lambert”, especially not to his closest friend Ben and his wife Gabi! There is nothing in the Days of Our Lives weekly preview that shows “Jake” admitting he’s Stefan, although it could happen.

There does seem to be some reason for not raising Stefan as Stefan and giving him that bionic heart though – could it be because Stefan is the backup body for his father? Or will we see The Phoenix rise with a whole new bionic body! After all the Phoenix always rises and if he’s in his son Stefan’s body with a bionic heart, of course, he’s going to use an assumed name until he’s ready to strike!