Is Yandy Smith-Harris the problem? She’s in a new feud every other day and she does remain the common element in all these arguments. Smith-Harris seems to draw nasty people to her like a moth to a flame. So, maybe she’s the problem. Maybe Smith-Harris has just of a nasty attitude as them that she’s been hiding and that’s why so many people don’t like her. According to Atlanta Black Star, 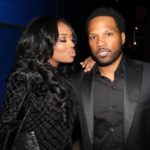 “Yandy Smith-Harris and Samantha Wallace are still feuding. Wallace, the mother to one of Mendeecees Harris‘ children, threw a jab at Smith-Harris via Instagram on Friday, April 17. The two reality stars from “Love and Hip-Hop: New York” are publicly hashing out their differences nearly three years after their blowout”.

This “blowout” by the way was a physical fight that was prevented thanks to the security team. But otherwise, these two women hated each other. It was pretty obvious after they said what they said at the LHHNY reunion show and so that was a little sad.

They should have been working together because their children were siblings and with Mendeecees away so long – it had been up to them to uphold the family. Smith-Harris and Wallace should have become friends during all this and the fact they never overcame their personal dislike of each other is sad and a little selfish. There were kids involved. The kids should always come first and the reigniting the feud like this is only going to hurt those same kids in the long run.

What was Wallace thinking? She should have just kept quiet. She didn’t need to say anything and now that she has its going to force Smith-Harris to respond.