Days of Our Lives spoilers reveal that Rafe Hernandez (Galen Gering) gets the shock of his life. Evan Frears aka Christian Maddox’s (Brock Kelly) lawyer announces she is suing for custody of David Ridgeway (Caleb and Kyler Ends). Does this mean that Zoey (Kelly Thiebaud) really is Orpheus’ (George DelHoyo) daughter? How can Rafe win against a hotshot attorney who is also a blood relative?

DOOL spoilers reveal that there is a good chance that Evan’s lawyer, Zoey is also the killer’s sister. It was only going to be a matter of time before we met her. As long-time fans know, Orpheus kidnapped Dr. Marlena Evans(Deidre Hall) many years ago and forced her to raise his two children — a boy and a girl. We already know the boy was Evan and now it seems we might have confirmation that the little girl is Zoey. 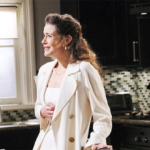 It is teased that during the week of April 20, Zoey will stun Rafe with some surprising news. She tells him that not only is she defending Evan, but plans on suing for custody of David. That’s right, Evan’s lawyer wants to have custody of Jordan Ridgeway’s (formerly Chrishell Hartley).

Days of Our Lives spoilers reveal that Orpheus and Evan always seem to be one step ahead of Rafe. This will definitely blindside him. Under normal circumstances, a laywer wouldn’t try to get custody of a client’s son unless she was directly involved. So, it seems clear that Zoey must be a blood relative and most likely, she is David’s aunt.

Days of Our Lives Spoilers: Who Will Win Custody?

It’s going to be hard for Rafe to win this custody battle. Not only is she a high-power lawyer that doesn’t lose, she is a blood relative of David’s. Typically, courts try to keep children within the family. Unless Rafe can prove that Zoey is unfit to raise a child, he just might lose the little boy he has grown to love like his own.

Who do you think will win custody of David? Will Rafe be victorious or could Zoey actually get the litlte boy? Keep watching the NBC soap opera to see how this storyline ends.