Days of Our Lives spoilers reveal that Brady Black (Eric Martsolf) can’t wrap his around the fact that Mackenzie “Mickey” Horton (the May twins) is his daughter. Even after the birthmark observation and talking to John Black (Drake Hogestyn), he can’t believe it. The actor explains why Brady is so hesitant to accept the possibility of a baby switch. 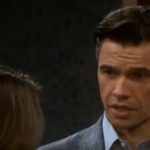 As fans saw, Brady talked to his father, John about the situation. Even though John thinks it can’t be a coincidence. Two babies were born on the same day, were in the same hospital nursery, and happen to have the same birthmark in the exact same location. Despite all of this, Brady tries to rationalize and explain it to himself.

Days of Our Lives spoilers reveal that even though Brady tries to convince himself that it’s not possible, he won’t be able to get it out of his head. There is also the fact that Kristen DiMera (Stacy Haiduk) can’t help but be drawn to Mickey like a magnet.

He doesn’t want to share his observation with Kristen until he’s absolutely sure. So, he tries to keep it to himself, but still doesn’t believe that it’s possible.

Days of Our Lives Spoilers: Can’t Accept the Possibility

In the latest issue of Soap Opera Digest, actor Eric Martsolf explained why Brady can’t seem to accept that it’s likely Mickey is his daughter. He said, “Everyone around Brady is putting the puzzle together. Nicole [Walker, Arianne Zucker] is. John is. But Brady is holding onto the belief his daughter is gone and this cannot be a possibility.”

However, things will change next week when Eric tells Brady the truth about baby Mickey, despite Nicole suggesting they keep it to themselves. Will Brady find out that Nicole was actually considering not telling Brady and Kristen their baby is alive? How will he react to his “friend” contemplating keeping such a huge secret, simply because of her hatred for the reformed she-devil? Fans will have to keep watching the NBC soap opera to find out.

Be sure to catch up on everything happening with DOOL right now. Come back here often for Days of spoilers, news, and updates.