The question is, just how cartoonish will Meghan get in what seems like a desperate attempt to become relevant to North American audiences once more? Fans of the Duchess of Sussex will remember that it wasn’t that long ago that Meghan awkwardly thrust herself upon Director Jon Favreau at a premier of the “Lion King.” While Meghan’s husband, Prince Harry made the initial, shameless pitch for gainful employment for his wife, Meghan quickly jumped in with her own two cents.

While some royal fans (especially in Britain) might be put off by what Meghan later suggested was mere joking around (some question if it was really a joke at all) others know that as Meghan and Harry begin the process of “Megxit,” the royal couple have to find work. After all, wasn’t becoming “financially independent” part of the reason Prince Harry and Meghan decided to take a gigantic leap backward from the responsibilities of royal life? Still, there were those who were utterly shocked by the royal couple’s behavior and who viewed it as a major breach of royal protocol. 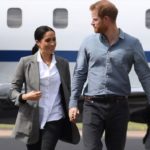 With that said, some might say, “Who cares?” Anyone who knows anyone in the entertainment industry understands that much success is dependent on “who you know.” It’s also dependent on taking action and getting ones’ self out there. Really, there’s no surprise then that Harry and Meghan might take advantage of every opportunity to achieve their goals and royal protocol be damned! Who amongst fans of the Sussexes can blame them?

Now, of course, everyone knows that Meghan got voice over work from Disney thanks to Harry’s bold approach. (Of course, Meghan’s initial work with Disney came in exchange for a hefty donation to a wildlife charity called Elephants Without Borders.) Yet Meghan and Harry both viewed it as a step toward getting back to Hollywood.

Indeed, Meghan Markle herself suggested, “this is just the beginning.” Although there have been no reports of major films lined up yet, fans may know that the producer of America’s longest running sit-com, “The Simpsons” has extended both Meghan and Harry an offer for cameo appearances. Meanwhile, Meghan’s agent Nick Collins has put out the word that Meghan is looking for work in a film with an ensemble cast. It’s even suggested that she might be open to appearing as a super-hero of some type.

Is Prince Harry Nothing More Than A Trophy Husband? https://t.co/aLRwqhzmQG

Of course, there remain those who may scoff and point the finger at what they view as crude efforts to get ahead at the expense of the royal family. After all, would Jon Favreau or Disney’s Bob Iger have given the slightest attention to an actress not on their radar if her husband wasn’t British royalty? Well, yes. Actually. That’s especially true given Meghan Markle’s fame from her days playing the character of Rachel on the hit TV series, “Suits.”

Regardless of what anyone says, fans know that Meghan Markle is a talented actress. She has an impressive body of television work on her resume. If Meghan can play her cards right, it’s likely only a matter of time before the duchess lands yet another (not so cartoonish) leading role.