Sister Wives star Kody Brown no longer has a desire to move back to Utah after it officially decriminalized polygamy. Fans of the TLC series have watched an entire season of moving woes as the Brown family insists on staying in Flagstaff, Arizona.

It’s all a matter as to how they plan to live. Following the news that the Utah Governor signed Senate Bill 102 into law, which reduced bigamy between consenting adults to an infraction similar to penalties on a traffic ticket, Sister Wives star Kody Brown sounded off on the matter.

While the Brown family patriarch was happy to hear that the bill had passed, he revealed that his family would not move back to Utah. They left due to the heavy persecution that they faced. 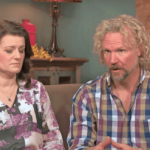 “Too late. Utah lost us,” Kody tweeted. “Now we have a new home in the free state of Arizona.”
His second wife, Janelle Brown, also shared her input on the news. She was more joyous that the state passed the bill. The Darger Family were the first to praise the new on social media. She retweeted their message and wrote she couldn’t wait to celebrate with them. Sister Wives fans wondered if the bill being passed would cause the family to move back to Utah.

Kody previously revealed on the TLC show that he wanted to move back there eventually. He even wanted to move back after leaving Las Vegas. But the law prevented them from returning to their home state. The constant issues that the family has dealt with in Flagstaff has made it difficult when it comes to the idea of another big move. On Season 14 of Sister Wives, fans saw the family argue over their property in Coyote Pass.

Kody also revealed his plans to move his four wives and 18 children under one roof. This has led to many disagreements. In addition, Meri was forced out of her rental home by neighbors who didn’t want her living near them.

Janelle also had to move to another rental while Robyn had to leave her home since the owners sold it. The family has not started building their new homes on Coyote Pass. This has been the most stressful season yet.  Sister Wives airs Sundays at 10 p.m. ET on TLC.