Love and Hip Hop Miami fans are asking is she or isn’t she? Joseline Hernandez’s recent social media post has everyone wondering if she’s pregnant. The “Love & Hip Hop” star was seen wearing a flowing dress and, in the photo, she was also seen hiding her stomach. Now, this could be a sign she’s pregnant or she could just as easily have wanted to highlight her booty.

Anything is a given with this photo, but there also other signs of a possible pregnancy. Joseline has also gotten engaged recently. She and her boyfriend DJ Balistic Beats had just confirmed their engagement and so its possible Joseline really is pregnant. She did say she wanted to start over in Miami. 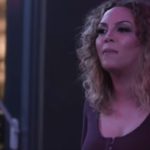 Joseline went to Miami after several seasons of the hit show in Atlanta. She declared she wanted to put Atlanta behind her and now that her life is toxic free – maybe she does want another baby. Fans seemed to believe she was pregnant. They were already congratulating her online. They were also all excited for Joseline. There wasn’t any negative feedback and so her fans really do love her.

Joseline hasn’t responded to anyone. She’s been keeping quiet and that alone could mean she’s pregnant because usually Joseline does respond.

Its still up in the air whether or not she is or she isn’t pregnant, but until she confirms, everyone is just going to be left wondering.