This Is Us season 4 spoilers reveal we will learn more about teen Kate Pearson’s (Hannah Zeile) relationship with “creepy Marc” (Austin Abrams). During the last episode, the two had a tense phone call. Even though the Pearson family noticed it was not a good conversation, it was quickly dismissed. Here’s the reason why it was ignored, despite it being a red flag.

This Is Us Spoilers: Randall Pearson’s Explanation

On the last episode of This Is Us, Kate was on the phone with her boyfriend, Marc. We don’t know what they were discussing, but Kate asked him why he sounded like he was mad. Then, she noticed others were listening to her conversation and taking notice, so she left the room. 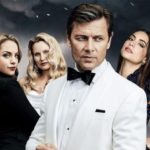 Despite there being some concern, Randall Pearson (Niles Fitch) told his mom that on Dawson’s Creek, everyone talks like that.

Around the same time as Kate’s phone call, Kevin Pearson (Logan Shroyer) walked in with his girlfriend. He didn’t really say much of anything except to fire off an insult at Marc. It is clear he didn’t care for the guy, though and just assumed it was a typical lovers spat.

This Is Us Spoilers: Rebecca Pearson Preoccupied

This Is Is season 4 spoilers reveal Rebecca Pearson (Mandy Moore) has a lot on her plate. She is now the sole provider of three children, trying to make a mortgage and pay utilities, food and all those extras. In the last episode, she was also dealing with them needing new appliances.

Even though she did show some worry about Kate’s relationship, she was quickly distracted by her other children.

This Is Us Spoilers: Hiding the Truth

The main reason why Kate’s argument with Marc was largely ignored is that the Pearson family only heard a small snippet of it. If they heard how Marc was speaking to Kate or what they were fighting about, even the frequency of the heated discussions, perhaps things would be different. Plus, Kate will become quite good at hiding it until the problem can be ignored no longer. Luckily for Kate, she survives and doesn’t turn into another statistic.