Mendeecees Harris is being released. The Love & Hip Hop NY star has been in jail for four years now and both he and his family thought it was going to be more years before he was released.

However, it seems he’s been granted a miracle. Mendeecees is being released soon and he’ll get to reunite with his family.

Mendeecees was sentenced to 8 years for drug trafficking. He went away when his youngest daughter was one and so the little girl has only known him as an absent parent. She probably wouldn’t know what to do with a father once he comes out, but there’s also an issue with Mendeecees’s wife Yandy and her foster daughter Infinity. 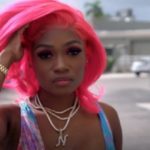 Yandy became a foster parent while her husband was away. She took in a teenage girl who has had trouble in the past because the child ran away from previous homes and so Yandy had to keep a close eye on her. There was also the issue with her being a foster child and Mendeecees being a known criminal.

Typically, he wouldn’t have been allowed to become a foster parent because of his record and so Yandy doesn’t know if its okay for him to stay at the house the same time that her foster child is there.

It might even be against the rules for them to cohabitate with a felon. If so, that also means that Yandy is going to have to choose between her husband and her daughter and so everyone will be watching to see what happens when Mendeecees is finally released.